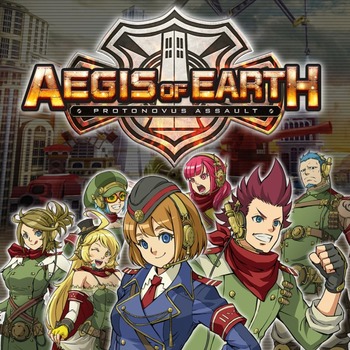 Aegis of Earth: Protonovus Assault, also known as Zettai Geigeki Wars: Metropolis Defenders in Japan, is a Real-Time Strategy game, released on March 15th, 2016 for the PlayStation 3, PlayStation 4, and Play Station Vita, then ported to PC on July 18th, 2016.

The game is set fifty years after a tragic catastrophe known as the "Silent Apocalypse". As a result of this event, mysterious alien life forms dubbed "Protonovus" have arrived intending to destroy the rest of humanity. Accompanying the arrival of the monsters was a new element known as "Altenite", the last hope of survival for humanity. To protect themselves from continuous Protonovus assaults, humans created fortified cities armed with weapons of their own. With the approaching "Altered States" and more monster attacks, the inhabitants of the cities must now prepare themselves while they continue to expand and defend their cities.

The player takes control of the urban areas, trying to collect taxes from residents and purchase equipment. During this time, the player can set up the battlefield with his or her own units throughout each layer of the city to prepare for the invasion. When engaged in combat, the player must then use the weapons to repel the approaching enemies and defend their city. Players can also use the "merge" method, which involves placing two or more weapons of the same type on a line to increase the damage on the enemies.