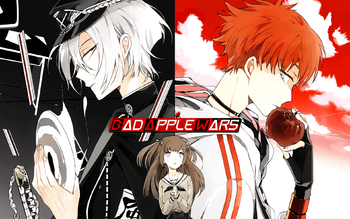 Congratulations on your death!
And welcome to NEVAEH Academy!
"You must never taste the apple forbidden. Those who do shall see only expulsion as their reward."
Advertisement:

Bad Apple Wars is a PlayStation Vita Visual Novel developed and published by Idea Factory. It was released on November 19, 2015 in Japan and on October 13, 2017 in North America and Europe.

The protagonist (default named Rinka) was killed in a car accident on her first day of school and finds herself in the afterlife standing before NEVAEH Academy, a school for lost souls. Any student who behaves and follows the rules will be able to graduate and resurrect. The school is divided between Good Apples, those who follow the rules and are on the path of resurrection, and Bad Apples, those who disobey the rules with the want of expulsion. The Prefects are the sworn enforcers of the school rules, trying to discipline the Bad Apples into following the school's rules.

The "empty" Rinka has to decide which group she wants to join—those who want to start life anew or those who want to get expelled, with the hope that expulsion means returning to their previous life.