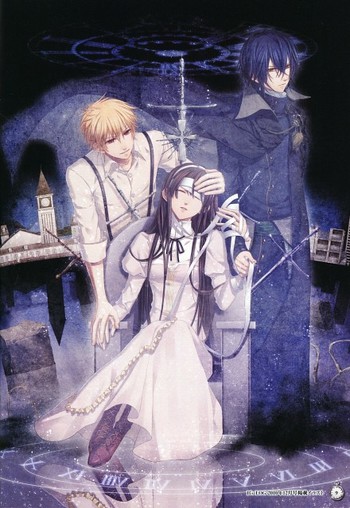 A world without you, is a world I cannot live in.
"I want to become an adult soon...but thinking about that makes me a child, doesn't it?"
— Nadeshiko Kurou
Advertisement:

The story follows Nadeshiko Kurou, the young, 12-year old heiress of her father's company, the Kurou Group, who, along with her childhood friend Riichirou Kanou, attends a private school like most regular rich kids her age. Recently however, Nadeshiko is plagued by strange dreams where she's in a ruined, dystopic world and where she herself appears ten years older. These dreams begin appearing in more frequency the moment the resident New Transfer Student, Takato Kaido, enters her life.

One day, her class advisor Kaga-sensei, decides to round her, Riichirou, and Takato, together with four other "problem" children: Shuuya Tokita, Madoka Hanabusa, Toranosuke Saionji, and Nakaba Hanabusa, to form an after-school club of sorts for them to do extra assignments Kaga-sensei hands them, a club they eventually name, Clock Zero. Excepting her strange dreams and the strange new talking stuffed animal Kaga-sensei gives her, Nadeshiko spends living her school days peacefully, albeit in a livelier way, with her newfound friends.

That is, until the figures she keeps seeing from her recurring dreams start to appear in reality and she soon finds herself in the ruined world she thought she'd only see in her dreams...

As this Visual Novel has yet to see an English release in the west, beware of unmarked spoilers.

I'm alive because you are here. For me, there is no meaning in a world without you.