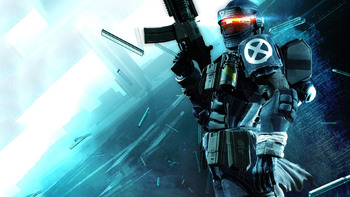 Coded Arms is a series of First-Person Shooters developed published by Konami and released for the Playstation Portable . Other than its unusual virtual reality theme and being a rare example of a Japanese-developed FPS, the first game was also notable for featuring randomly-generated level design and dungeon crawling elements long before these became popular in action games.

Released in 2005, the first Coded Arms takes place in the late 21st century, where technological advances have allowed for direct neural connections to computer networks. Around this time, the military-industrial complex develops a military simulation named A.I.D.A to train personnel against an unknown alien race. A.I.D.A goes out of control during development and starts spreading to all layers of the internet. Though access to it is forbidden by authorities due to the risk of contracting "Achiba Syndrome" and dying in real life, an underground economy forms around A.I.D.A as particularly enterprising hackers risk their lives recovering the valuable files inside the simulation in exchange for large cash bounties. The players take the role of one such "Coded One" fighting his way through the simulation's battlefields to access A.I.D.A's kernel.

A sequel was released two years later, titled Coded Arms Contagion. Some times after the events of the first game, the military has managed to contain A.I.D.A and is in the final stages of testing its new iteration. The player plays as Jacob Grant, a special force operatives who, after a routine training exercise goes wrong, fight his way through the simulation rescue the stranded Bravo Team and fend off the assault of Maelstrom, a group of terrorist hackers looking to take back A.I.D.A. Contagion ditched the dungeon crawling-focus of the first game in favor of a more linear, story-driven direction.

A Playstation 3 sequel titled Coded Arm Assault was announced in 2007 and was playable at one iteration of the TGS before being quietly cancelled. Additionally, the track "satellite020712" from the first game is featured in a few iterations of the beatmania series.

The series contain the following tropes