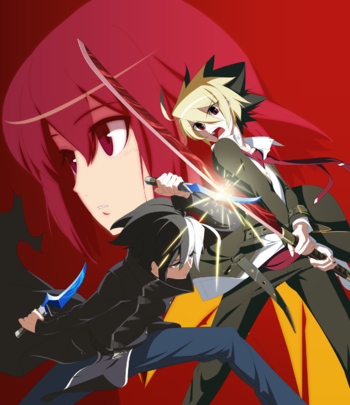 Under Night In-Birth is a HD 2D Fighting Game made by French Bread, the makers of Cult Classic, Melty Blood. It combines fast paced, flashy combat with a unique Tug of War mechanic which rewards good defence. As of now, the roster includes twenty-one characters, with a couple of guest characters thrown in for good measure.

In the quiet town of Kanzakai, a rumour stirs among the residents: "Those who get their souls devoured by the Dark Shadows, will end up wandering eternally in a mysterious world."

They say that every full moon, a strange, alternate world merges with ours and mysterious monsters roam throughout the streets, killing and devouring all that they see. No one knows for sure as to whether it is real or not, but for the most part, it all seems like hokey. Right?

Hyde Kido is an Ordinary High-School Student, he has an ordinary life, ordinary friends and goes to an ordinary school, and he likes it that way. One day, he has a rather eventful encounter with a strange girl named Linne and they separate on that night after he shows her around the city. The next day, as Hyde is walking home after school, Hyde is beset upon by the rumored man-eating shadows and chased into an alleyway. Unable to move and do anything against his formless attackers, Hyde is narrowly saved by Linne who leaps in to fight the shadows off. However, Hyde is bitten by the creatures and slays the last shadow on his own when he is able to manifest a strange power. Linne helps Hyde up and the true stage of the city he once thought knew is revealed to him.

Those who survive their encounter with Voids become known as In-births, and the city of Kanzakai has been recently recognized as the most concentrated location of in-birth activity. In-births are able to utilize a power known as EXS, the energy source present in all living things. The particular nights where in-births and voids roam the streets are known as Hollow Nights and entire organizations have risen and fallen in their attempts to rule with their powers or keep wanton uses of powers in check. The longest lasting organization that currently holds the most authority over the night is Licht Kreis, an international policing force under the day-time guise of a benevolent charity enterprise. Linne formerly was associated with the now disbanded Night Blade clan who previously fought against Licht Kreis but in-fighting has led to their disbandment. Kanzakai itself however houses another prolific organization of in-births that has recently gained the attention of Licht Kreis' eye, the group known as Amnesia, led by a woman who seeks to ascend to a higher state of being, surpassing that of an in-birth: a Re-Birth. Caught in the middle of conflicting organizations and other numerous outliers in the city streets, Hyde finds himself caught in the middle of the mess, allied only with Linne and her companion Waldstein and meeting familiar faces he thought he knew and new ones to fight.

Gameplay of Under Night In-Birth, despite its 'anime airdash fighter' root , is mostly focuses on fast-paced ground game with an addition of Assault universal action that let all characters do a quick leap for mobility or starts an overhead attack similar to short hopping in The King of Fighters, but can be done in the air as well. The game features unique resource called GRD (Grind Grid) in addition to traditional 'super gauge' found in most 2D fighting games. The GRD aims to simulate how some anime characters gather aura from surroundings to power themselves up. Both players try to fill more GRD than their opponent by making proper defense in a tug-of-war like fashion, in order to gain damage boost (called Vorpal) among other character-specific benefits at the moment the GRD timer runs out in each cycle throughout the match.

Originally released on September 20, 2012 in arcades. It later received two major updates titled Under Night In-Birth Exe:Late, released on September 9th 2013, and Under Night In-Birth Exe:Late[st], released on July 23, 2015. Both revisions served to rebalance the roster, updated graphics, and added several new characters, which can be read about on the game's character sheet. Late[st] also added Chronicle Mode, a collection of visual novel-esque stories that finally show the game's universe and backstory. A PlayStation 3 port of Exe:Late was released on July 24, 2014, and would eventually be localized in 2015

in North Amercia, with Europe getting the game a few days later. It was later released, in its Exe:Late form, on Steam on June 12, 2016. Exe:Late[st] also received a console port on Playstation 3, Playstation 4, and Playstation Vita consoles, releasing in Japan on July 20, 2017. Exe:Late[st] was released on February 9th, 2018 in both NA and EU regions and localized by both Aksys/P-Qube respectively. "Exe:Late[st]" was released on PC on August 20th, 2018.

Another update of the game titled Under Night In-Birth Exe:Late [cl-r] (Pronounced "Claire") released for PS4 and Nintendo Switch on Feburary 20th, 2020 in the US/JP and on the 21st in EU/PAL regions. UNIclr was also released on PC on March 27th, 2020. Those with a PS4 or PC copy of UNIst are able to update the game to have the balance changes of UNIclr on the same day of its release, however, DLC specific to UNIclr for UNIst owners is sold seperately. Standalone versions of UNIclr (physically and digitally) includes DLC's for colors 31-40 for all characters and Round Call voices up to the UNIst cast. note Londrekia's Round Call voice is sold seperately, however.

A new installment was confirmed to be in development on Twitter on September 20th, 2021, though it remains to be seen if this will be another update or a brand new game entirely.

BREAK DOWN
Vanishment of Void
Feedback

Orie and Weiss Get Called Out

Hazama might not exactly be very trustworthy, but he's right about the fact that ambushing a wanted man for something that might save people and not having any idea what to do next isn't very bright, especially considering these two.

Orie and Weiss Get Called Out

Hazama might not exactly be very trustworthy, but he's right about the fact that ambushing a wanted man for something that might save people and not having any idea what to do next isn't very bright, especially considering these two.