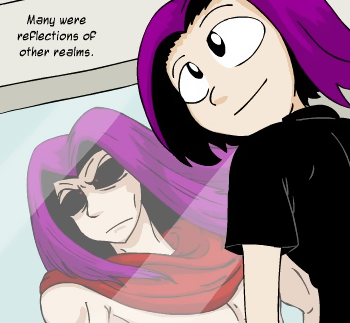 The guy in the mirror is evil. The guy not in the mirror is a guy.note Well, usually at least...
"You can defeat me Scott... but can you defeat... yourself?"
— Gideon, Scott Pilgrim vs. The World
Advertisement:

When you look into a mirror, you see a person who is in some ways identical to yourself, but who is also in some ways your opposite. If you are right-handed, your mirror will show a left-handed person, and vice versa.

Not to be confused with an Alternate Self, who is the same person without being an opposite. Might have gone through different experiences and been changed by them, but is not a polar opposite like the Mirror Self. Compare Me's a Crowd and Mirror Match.

Do not confuse with Mirror Character, although the tropes may overlap.