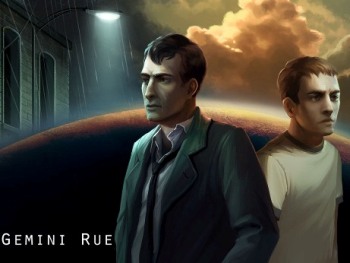 He's trying to change who he is, something that I couldn't do. If I can help him do that... Maybe, maybe I can live with myself.
— Azriel

, talking about his brother.
Advertisement:

Gemini Rue is a Cyberpunk Adventure Game from 2013, developed by Joshua Nuernberger, and published by Wadjet Eye Games. The game takes a lot of cues from Blade Runner in terms of aesthetics, and is highly recommended for anyone who enjoys a serious adventure game. As a sidenote, this is possibly the only point-and-click adventure game ever to include gunplay as a developed and re-used mechanic.

In the distant future, humankind has not only begun colonizing other star systems, but other galaxies. This tale takes place in the Gemini galaxy, in a system that has been completely taken over by the Boryokudan, and revolves around the stories of two people.

The first is Azriel Odin, a former Boryokudan assassin who participated in the Gemini wars that led the system to their current state. He had a change of heart, and is now working for the police from the Taurus Galaxy, trying to undermine the Boryokudan. His mission is to find his brother, who he believes is stranded somewhere on the planet Barracus, a Boryokudan-controlled mining world.

The second is Delta-Six, AKA "Charlie," a prisoner in some kind of space rehabilitation facility called Center 7. His memory has been wiped, perhaps multiple times, but despite this he knows he must escape from his prison by any means necessary. Something strange and wrong is happening in the prison (yes, moreso than usual for a place that mind-wipes people whenever they're disobedient), and he must get out before he finishes his training exams.