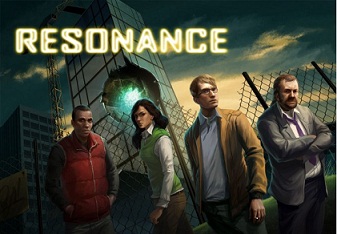 Funny story - no matter what choices you make in the game, you will never see this image.note  Left to right: Ray, Anna, Ed, and Bennett. Not all of them will make it.
Advertisement:

Resonance is a 2012 Science Fiction Adventure Game developed by xii games and published by Wadjet Eye Games (of The Blackwell Series and Gemini Rue fame). It has nothing to do with the Pokemon fanfic over in Darth Wiki.

20 Minutes into the Future, the brilliant particle physicist, Professor Javier Morales, has figured out the final calculations to unlock a brand new form of energy - Resonance. By separating and storing the two subparticles of an electron, then releasing them, the resulting collision of particles releases an explosion of clean, reusable energy. The further the separation, the more power.

However, "explosion" is the operative word, and like all new discoveries, more than a few unsavoury characters are interested in the new way to make things go "boom".

In the aftermath of a Resonance-related tragedy, Ed, Dr. Morales' research assistant, Anna, a doctor and Morales's niece, Ray, a journalist and Bennett, a detective, are brought together to uncover the secret of Resonance before the more "explosively minded" do first.