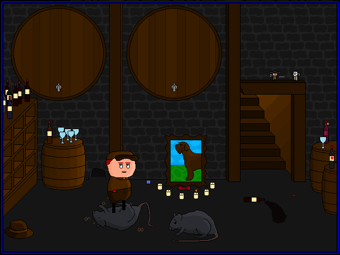 You are in a WINE CELLAR with a DEAD RAT, a STARVING RAT, and a FRANKLY DISGUSTING ROSE from a VERY BAD YEAR.
Advertisement:

Wicked Awesome Adventure is a webcomic/webgame created by Andrew Heil for the consumption of any viewers familiar with text-based adventure games. It features four "playable character" adventurers (Rhys O'Callihan, Jill "Jet" Thunderson, Cadungery Muffinbottom III, and Alan) who, after surviving a Darwinian Apocalypse, awake to a peculiar world. Read/play it here!

After a post in October 2017 indicating updates would become sporadic (most likely due the creator's new baby) nothing more was posted until August 2019 when the creator posted that it was unlikely the comic would ever be updated again.