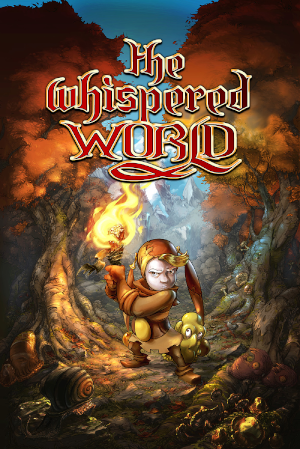 It tells the story of Sadwick, a young, sad clown beset by nightmares which seem to foretell the End of the World. One day, Sadwick meets a messenger of the king on an important mission to prevent the impending apocalypse. At the messenger's direction, Sadwick seeks out the oracle Shana, who tells him the meaning of his dreams: that he himself is prophesied to be the harbinger of the world's destruction.

Sadwick, despite his tendency towards pessimism, refuses to accept his destiny as a destroyer, and takes it upon himself to save the world. To do that, he needs to carry a magical artifact called the Whispering Stone to Corona, to the King's Castle. It's a long journey, full of trials and tribulations, but Sadwick refuses to let either his own insecurities or the very real dangers in his path dissuade him from fighting against fate.

Has a Sequel titled Silence, which tales place a few years after this game, and where we follow the ill boy, whose name is Noah, and his sister Renie as they travel to this world, called Silence.