Film / Exit Through the Gift Shop 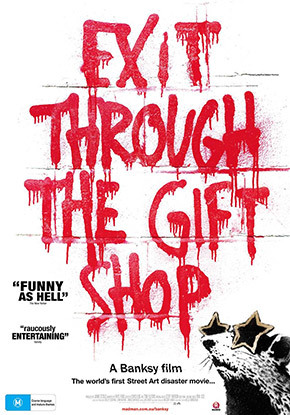 Guetta carries a camera wherever he goes and films everything. When he discovers that his cousin is the street artist Space Invader, he becomes the unofficial documentarian of the rising street art movement, meeting and accompanying prominent artists like Shepard Fairey. He eventually sets his sights on the most famous and elusive street artist of all: Banksy. But everything turns around when Banksy inspires him to become a street artist himself under the name Mr. Brainwash.

On the surface, the film appears as a relatively straightforward documentary about street art and Guetta's search for Banksy, but as the film goes on, its framing starts to slowly shift, with points like the what the documentary is actually about and whether any of it is actually real becoming more pertinent. Often compared to F for Fake, Exit Through the Gift Shop is likewise a very "meta" exploration on the definition of art and artistry, with its own unique takes on iconography, creative inspiration, and the facetiousness of it all.

Exit Through the Gift Shop provides examples of: