King on His Deathbed 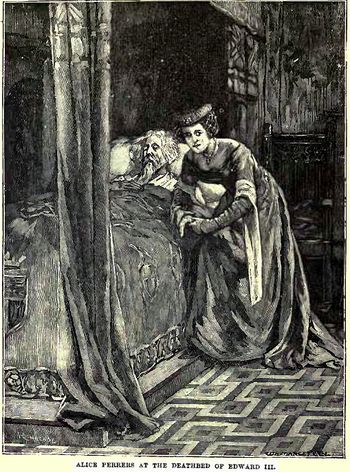 The King, The Emperor, or the high commander has become terminally ill, but lingers on his deathbed for weeks or months. His loyal retainers stand vigil at his side, mourning the loss of their leader and dreading the moment of his death... or are they? It seems the anticipated power vacuum has kicked off furious machinations among the members of the court. Heirs and aspirants to the throne are collecting as many supporters as they can beg, bribe, or threaten. There may even be whispers of Civil War.

If the royal power is still lucid, he or she may be desperately trying to prevent the looming anarchy, but hindered by their lack of trustworthy lieutenants. If the illness is such that they are senile, insane, or comatose, they will not yet have named their heir, or left standing orders that make things awkward for everyone, but no one has the authority to rescind them.

If it wasn't a Decadent Court already, it probably is now. Expect to see power plays by the Evil Chancellor, The Evil Prince, The Royal Bastard, or — God help you — The Caligula. Though strangely, you probably don't have to worry about The Baroness. If this work is Darker and Edgier, expect everyone to develop Chronic Backstabbing Disorder; if it's a more lighthearted work, watch the good guys dig up a Reluctant Ruler, or rally around The Wise Prince.