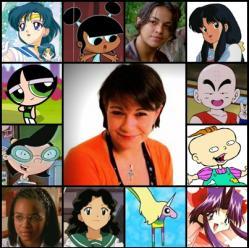 Rossy Aguirre (in the middle) and some of her roles
Rosanelda Geraldina López Aguirre, better known as Rossy Aguirre (born April 2, 1968) is a female Mexican VA who achieved fame with two iconic roles: Ami from Sailor Moon and Akane from Ranma ½. Her two better known "typecasts" are: the tomboyish Bokukko or the pre-teen/teen boy. Her mother was the late voice actress Rosanelda Aguirre.
Advertisement:

She's easily recognizable for her nasally voice that makes her sound very youthful, thus allowing her to act a variety of different types of young and adult characters.