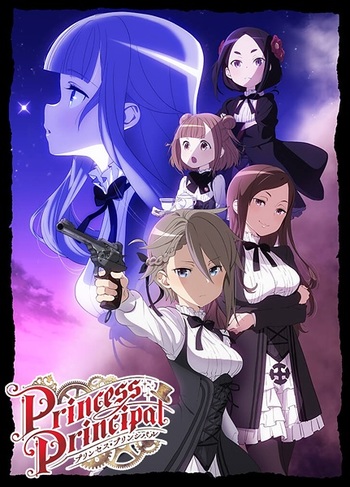 I will never be deceived. I'm a girl who sees through lies From front to back: Ange, Dorothy, Beatrice, Chise, and Princess Charlotte
Advertisement:

Princess Principal is an original anime series produced by Studio 3Hz and Actas, released as part of the Summer 2017 anime season. It was directed by Masaki Tachibana, with scripts written by Ichiro Okouchi, character designs by Kouhaku Kobayashi and Yukie Akiya, and its musical score is composed by Yuki Kajiura of Sword Art Online and Puella Magi Madoka Magica fame, who this time integrates elements of Swing and Jazz into her signature epic rock-opera style.

In an alternate universe set in the 19th century, the mighty Kingdom of Albion, the greatest power in the world, has been split in two. West lies the Commonwealth of Albion; east, the old Kingdom. The two nations are separated by a great wall that runs just west of the royal capital of London. In this shady world of espionage, violence and intrigue, a team of five teenage Commonwealth spies operate together, embedded undercover in the prestigious Queen's Mayfair Academy. One of them is none other than a royal princess.

On August 10, 2017, a mobile puzzle game for Android and iPhone launched in Japan: Princess Principal: Game of Mission.

On April 28, 2018, a second season was announced in the form of 6 theatrical releases, following in the footsteps of Girls Und Panzer Das Finale and Space Battleship Yamato 2199. Production on the movie finished on March 30, 2020, with an initial theatrical release date of April 10, 2020, but was delayed due to the pandemic at the time to February 11, 2021. The second movie had its theatrical release on September 23, 2021.