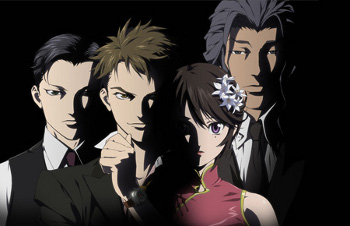 The second anime series from Anime no Chikara (see Sound of the Sky), Night Raid 1931 (Japanese title Senkō no Night Raid) is a 2010 anime set in China in 1931. It tells the story of a covert unit of the Imperial Japanese Army, the Sakurai Kikan, who use their various super-powers to protect Japanese interests. Intrigue abounds, both political and personal, since it seems everyone has their own reasons for being there. The team consists of Sonogi Yukina and her manservant Kagiya Natsume, who are looking for Yukina's brother who disappeared after seemingly defecting from the Imperial Army; stern Military Brat Iha Kazura, and laid back hero Miyoshi Aoi.