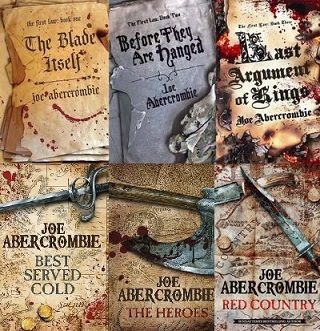 There's a lot of blood.
The First Law is a series of Low Fantasy novels and short-stories written by British writer Joe Abercrombie. They are characterized by extreme grittiness, grim wit, being on the far cynical hand of the Sliding Scale of Idealism Versus Cynicism, and the intention to subvert and deconstruct a certain number of Fantasy tropes.
Advertisement:

The first three novels form a trilogy. The next three each stand alone but continue the progression of the setting's timeline. A third set of books forms a second trilogy set 25-30 years after the first trilogy. In addition, there is an anthology of short stories called Sharp Ends, which was published after Red Country and jumps around the timeline of the first six novels.

The setting is a fictional world that mimics several facets of the ancient to classical world. The action takes place mostly in, and regards people from, a central realm known as the Union, a region beset upon on all sides by savages and orc stand-ins from the North (not just a direction, but the name of the continent, according to Union cartographers and Northmen), the mighty Gurkhish Empire to the south, mercenary bands from the continent of Styria to the southeast, and the machinations of the crumbling magocratic Old Empire in the far west. The Union appears to be in a state of near-perpetual war, constantly maneuvered into seemingly useless conflicts by an uncompromisingly proud foreign policy.

Not to be confused with Isaac Asimov's Short Story, "First Law", which is about robots.