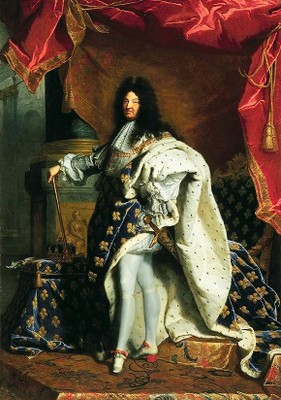 So good looking, they needed 2 Leonardo DiCaprios to play him.
Je m'en vais, mais l'État demeurera toujours. (I am leaving, but the State will remain forever.)

The longest-reigning King of France (5 September 1638 - 1 September 1715)— and indeed the longest-reigning monarch of any great European powernote Several minor German princes reigned longer, though since they were subordinate to other kings or emperors they're often not considered to count.—known as Louis the Great or the Sun King. He was the most influential monarch of the 17th century. His most visible surviving legacy is the ludicrously grand palace he built in Versailles, which millions of tourists visit each year.

Louis' impact on French history requires a bit of context: namely, the fact that feudalism is decentralized. In theory, in a feudal government, when the king says, "Go do this," everyone has to obey, but in practice the other knights, barons, viscounts, counts, barons, dukes and princes have some leeway to hem, to haw, to temporize, to deliberate, and so on and so forth. Moreover, feudalism was a highly transactional form of rule, and very often a particular lord or region’s loyalty to the Crown had initially been secured with pledges by the Crown to respect certain rights and privileges, which even centuries later the lords and regions remembered—and would see any violation of those rights and privileges as terminating their duty to obey royal authority, since the Crown was no longer holding up its end of the bargain. Plus there was the fact that there were innumerable customs, traditions, and laws. While the king could try to override them, any attempt to change them would generally provoke concerted opposition from the lords if he tried doing that. And because feudal lords' status in the system was built on their access to resources and therefore their ability to raise armies, the monarch could only do so much to impose his will by force or fiat. Even when the king's own army was the biggest, strongest, and best in the country (and it often wasn't), it was rarely so strong that it could be trusted to win every fight, and even when it could, not every political dispute was worth turning into a civil war.

A feudal monarch thus relied on his own charisma and influence, rather than the power or resources of his office, at least partially... And Louis's father, the thirteenth of his name, was a bit limp in this area, despite having The Three Musketeers working for him. Another problem came from the king's first ministers, like Cardinals Richelieu and Mazarin, being accused by the nobles of usurping the king's power. Conveniently, this gave them an excuse to rebel against the cardinals' actions, since they justified themselves by defending the king's prerogative.

Louis XIV's youth was therefore spent amidst the Fronde, a great uprising of the nobility against the centralizing efforts of his regent (his mother, Anne of Austria) and her chief minister, Cardinal Mazarin. The practical result of the Fronde was that the royal family had to flee Paris while the royal armies struggled to crush the noble frondeurs. While an arrangement was finally reached that ended the revolt, Louis found the experience quite traumatic.note As an aside, the arrangement that ended the Fronde involved tax concessions to the nobility that contributed heavily to the sovereign debt crisis that served as the proximate trigger of The French Revolution about a century and a half later.

Louis thus resolved to break the power of the nobles to ever do something like that to the king ever again. He did this by doing his best to turn himself into an "absolute monarch." For one thing, instead of appointing a cardinal or someone else as his prime minister Louis personally took on the business of government himself. This made it much more awkward for any would-be noble rebels to accuse the prime minister of usurping the king's power, as Louis could simply claim he was using the powers and fulfilling the responsibilities given to him by God. He also got the nobles on his side by using his charisma—in which he was not lacking—combined with some bending and reviving of old traditions to get the nobles to wait on him hand and foot. Seriously, they treated him like they were teen girls and he was a Teen Idol. You can't well plan a rebellion if you're busily obsessing over what the latest fashions are at court.

You see, one power the king always had was the power to invite lords to come to him and join his court—not because he could really "force" anyone to come,note Well, he could, but exercising that power was heavily curtailed by custom and was open to the hemming and hawing and temporizing under any circumstances other than "the King wants you at court because he intends to try you for some crime" or something equally serious. mind you, but because refusing such an invitation was seen as the height of ingratitude and therefore declining the king's invitation was not a decision taken lightly—and by the time young Louis took the throne, it had been a very long time since any noble had begged off a royal invitation because they didn't feel like going.note This excludes stuff like illness, deaths in the family, genuine emergencies at the estate, etc.—and even then, these were rarely used as excuses except in the most dire circumstances. Once at court, he could hand out official roles and duties in the court to the various nobles, which he did with abandon; by the end of his reign, it took 200 noble lords to help him get up and get dressed in the morning (officially, anyway—unofficially, he woke up two hours earlier to handle the royal paperwork). In a way, Louis applied the Bread and Circuses trope to the aristocracy rather than the common folk. He kept the nobles distracted with grand parties, and also found outlets for their energy with his multiple wars. Nobles who fared well in war could gain considerable prestige, so many of them didn't even object to not having formal roles in government.

This was Louis XIV's strategy in a nutshell: keep the lords busy with trivialities. Flatter their vanities. Make them jockey for grand but ultimately meaningless favours. Keep everyone as petty and shallow as possible. With the lords all at Versailles, Louis could keep track of who was fawning over him, reward them appropriately, and essentially keep them prisoner, able to stay only on his sufferance and not able to go home to their own fiefs and interfere with his rule. This was a genius political move, and it allowed Louis free rein as a—still limited by fundamental laws of the kingdom—autocrat, which he exploited without compunction.

While the nobles were distracted, Louis and his ministers began overhauling the way France was governed. Political power was systematically taken from many nobles and placed in the hands of royal intendants who depended on the king for their positions and enforced royal decrees and laws. This way, Louis effectively ended feudalism in France and prevented any more risks of a Fronde, or noble rebellion, from happening. It also didn't hurt that the frondeurs had discredited themselves in the eyes of many Frenchmen by causing further upheaval and misery to a populace already suffering from years of war with Spain and previous internecine conflicts. Many people actually wanted the monarch to take a firm hand against the aristocracy and restore order, which Louis was happy to provide. Part of Louis's reforms involved cracking down on the noble corruption and abuses of power which left France nearly bankrupt and caused the hapless commoners no end of grief.

Louis XIV's system was highly effective and led to substantial achievements. Unfortunately, the problem with a Cult of Personality is that you need a successor of equal ability and charisma, or else the whole thing will collapse when you die. Louis XIV's successor, Louis XV (actually his great-grandson) was nowhere near as effective, and his successor, Louis XVI (Louis XV's grandson), despite being a lot more able on the business side of things than he generally got credit for, was severely lacking in charisma and had difficulty making hard choices, and thus could not prevent the crisis of absolutist France devolving into the Revolution of 1789. Later historians feel that the Revolution was largely a consequence of Louis XIV's impossible-to-sustain absolute monarchy. They note that Louis XIV was inspired to take power as a result of the English Civil War and the rise of Cromwell (Charles II—the elder son of Louis' aunt Henriette Marienote Known in English as Queen Henrietta Maria—was an exile in France much of this timenote Though not all of it—Charles spent a lot of time in Spanish territory during that era, especially after Louis signed an alliance with Cromwellian England in 1657-58 to take three ports in Flanders, then under Spanish rule. Charles' younger brother James, the future James II, fought for the Spanish against France for that one.). The changes in England as a result of the Civil War and regicide, which led to greater power in the hands of Parliament (consolidated subsequently in the Glorious Revolution) did not create a parallel movement in France in the same period. This meant that civil institutions did not develop in France in the same way to erode state power. Rather, Louis XIV reformed and centralized power from the top. This reactionary approach meant that changes came belatedly in France and in a necessarily drastic form. Indeed, the political commentator Alexis de Tocqueville noted that Britain's extension of more autonomy to its localities and its overseas colonies allowed them to become more innovative and dynamic than France, where everything was controlled from the top down.

Of course, not everything went smoothly for Britain, especially when France decided to support a certain somebody's revolution. France played a crucial, even decisive role in the war, resulting in the colonies gaining independence from Britain. However, this would ultimately contribute to France's own destabilization. Outside of achieving a bit of revenge, France itself gained very little. Practically none of the losses France suffered from its defeat in the Seven Years' War (1756–1763) were reversed. Nor did America become a new and powerful ally, as it was Britain who immediately became the colonies' largest trading partner. At the same time, the war was very expensive and France's finances were left in disastrous straits. They had also just assisted in the establishment of a nation fundamentally opposed to everything they stood for (a strong monarchy, a large nobility, and a powerful Catholic Church), contributing to their own revolution and civil war a few years later, which would prove far more bloody than the one which had just occurred on the other side of the Atlantic, and ultimately lead to the annihilation of the French nobility and monarchy and the deaths of millions across Europe. This in turn ultimately allowed Britain to become more powerful than France during the 18th century. However, Tocqueville also noted that the signal achievement of the Jacobins during the Revolution was to forge a unified centralized French state, a process that Louis XIV had begun, which they had completed and which Napoléon Bonaparte permanently consolidated with his Civil Code. Interestingly, the anti-Bourbon Napoleon himself had some respect for his predecessor, describing Louis XIV as "the only King of France worthy of the name."