A tiny landlocked Southern African country mostly surrounded by South Africa and also bordered by Mozambique to the east, Eswatini (Swazi: eSwatini), officially the Kingdom of Eswatini (Swazi: Umbuso weSwatini) and formerly known as Swaziland, is an absolute monarchy, ruled by Ngwenyama ("King") Mswati III since 1986. The Ngwenyama is head of state and appoints the country's prime ministers and a number of representatives of both chambers (Senate and House of Assembly) in the country's parliament, and elections are held every 5 years to determine the House of Assembly and the Senate majority. The country has two capitals: Mbabane, the executive capital and largest city, and Lobamba, the legislative capital. It also had the dubious "honor" of having the lowest estimated life expectancy in the world since 2013 due to major health issues like HIV/AIDS and tuberculosis, at 49.18 years. As of 2020, Eswatini has the 13th lowest life expectancy in the world, at 61.05 years.

Eswatini gets it's name from Mswati II, the greatest of the fighting kings of Swaziland, who greatly extended the area of the country to twice its current size. The country became a protectorate of the South African Republic under Ngwane V until the start of The Second Boer War in October 1899, and Ngwane V died during incwala (The main ritual of Kingship in Swaziland, taking place during the summer solstice) on December 1899. Swaziland then became a British protectorate after the Anglo-Boer war in 1903, and in 1968, Swaziland once again became independent under a constitution from the British.

One internationally famous person hails from Eswatini: Richard E. Grant (best known for playing Withnail in Withnail & I), who was born and raised in Mbabane. 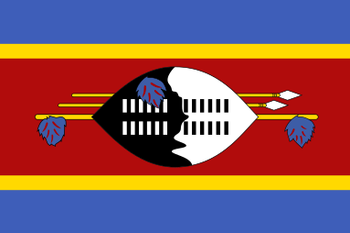 The design of the flag is based on a flag given by King Sobhuza II to the Swazi Pioneer Corps in 1941. It consists of a horizontal triband of blue (top and bottom) and yellow-edged red with a large black and white Nguni shield covering two assegais (local spears) and a Swazi fighting stick decorated with injobo (tassels-bunches of feathers of the widowbird and the lourie, used only by the king) all centered horizontally on the red band. The red stands for past battles, the blue for peace and stability, and the yellow for the resources of Eswatini, while the shield and spears symbolize protection from the country's enemies, and the black and white colour of the shield is meant to show that black and white people live in peaceful coexistence in Eswatini.

O Lord our God, bestower of the blessings of the Swazi;
We give Thee thanks for all our good fortune;
We offer thanks and praise for our King
And for our fair land, its hills and rivers.
Thy blessings be on all rulers of our Country;
Thine alone is our Lord;
We pray Thee to grant us wisdom without deceit or malice.
Establish and fortify us, Lord Eternal.
Government Miscellaneous