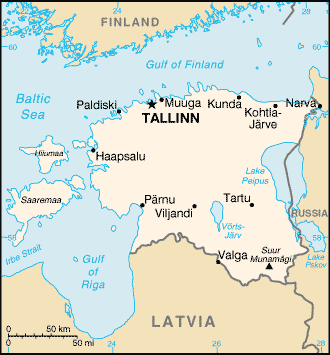 Estonia (Estonian: Eesti), officially known as the Republic of Estonia (Estonian: Eesti Vabariik), is a Northern European country and the northernmost of the three Baltic states, which were the first to break away from the Soviet Union. The Estonian language is a Finno-Ugric language, closely related to Finnish, more distantly related to Sami (Laplandic) and Hungarian, and not related to any major European languages.

Among its various historical and cultural connections, Estonia feels itself to be more Nordic than anything else, and has joined The European Union, contributing troops to the Nordic Battle Group and stating a desire to join the Nordic Council.

After being conquered in the 13th century, Estonia had been ruled by Danes, Germans, Swedes and Russians throughout history before finally declaring its independence from the ashes of the Russian Empire in 1918. It wasn't to last - the Soviet Union occupied the Baltic states in 1940. When the Germans rolled into town a year later, the Estonians initially greeted them as liberators, before realizing that the Nazis were no better than the Soviets.

(For what it's worth, the US and EU never recognized the annexation and Estonia sees itself today as the same state that became independent in 1918.)

In 1991, Estonia regained independence, and had been building up to this during the Glasnost/Perestroika era with a campaign of... singing

. Estonia has always had a strong folk music tradition, and protests expressed themselves universally in song.

Estonia is a land of forests, lakes and islands much like Finland, with several species that have largely disappeared from Europe still surviving, although there are some issues with the occupation-era legacy of environmental pollution. It has been in many ways the success story of the former Soviet countries in terms of economic growth and westernization. It is one of the world's fastest growing economies and has recently become known for widespread online services and for several innovative developments, like Skype.

Tallinn, the capital city, has an UNESCO protected Old Town that looks like somewhere out of a spy film. If Prague ever gets inconvenient for filmmakers, Tallinn (also popular for bachelor parties and booze cruises from Helsinki) is a good alternative.

A brief summary of history
Estonians are one of the several Finnic tribes that settled in northeastern Europe. Their earliest ancestors have been living in the region since the last Ice Age, later mixing with the Finno-Ugric arrivals from the east. By the 11th century the Estonian land was made up of loosely related "counties" (an unified state hadn't been formed yet) and vikings from the islands were occasionally raiding neighboring areas. In the 13th century the Northern Crusades with the goal to Christianize Europe's last pagans in the Baltics led to Estonia, after a long resistance, being taken over by the Germans and the Danes (the latter ended up selling their part to the Germans and bailing due to an near-successful uprising in 1343). The Livonian Order, a branch of The Teutonic Knights, created the "Order State" on Estonian and Latvian territory (collectively known as Livonia) that lasted for the rest of the Middle Ages, during which Tallinn developed into an important trading hub as part of the Hanseatic League.

After the Reformation, the Order fell and Estonia found itself as part of Sweden as a result of the Livonian War in 1561 (with southern Estonia briefly controlled by the Polish Lithuanian Commonwealth). This period is remembered for advances in education (like the founding of Estonia's oldest university in Tartu) and for common people getting more rights. In The Great Northern War, Sweden lost its Baltic territory, including Estonia, to the Russian Empire. Under both Swedish and Russian rule, the German nobility managed to keep most of its privileges, although serfdom ended decades earlier in the Baltic region than in most of the Russian Empire.

By the 19th century Enlightenment ideas, as well as educated Baltic Germans' interest in Estonian cultural heritage, gave way to the "national awakening". Events like a movement for Estonian-language education, publication of the epic Kalevipoeg and the first Song Festival developed the Estonian national identity and eventually led to a demand for an independent state. Hot on the heels of World War I and The Russian Revolution, elections for a provisional government and the following declaration of independence on February 24, 1918 resulted in Estonians fighting - and winning - the War of Independence, with a peace treaty signed with Russia in 1920.

The new Estonian state became a democratic parliamentary republic, occasionally struggling at first. One of the first in several changes and reforms was the distribution of the estates of the former nobility among the peasants (and the war veterans). There was a communist coup attempt in 1924 that was foiled.

Like in several other European countries, an authoritarian presidential government, although this one was supposedly more balanced and moderatenote There are varying accounts about this period; it's likely remembered somewhat more positively because the country was still independent and in comparison with the Stalinism and war that followed, took power in the 1930s, mainly as a preemptive move against the threat of the nationalist Vaps movement.

Before World War II broke out, the non-aggression pact between Nazi Germany and the Soviet Union included Estonia in the Soviet "sphere of influence" and so the USSR threatened Estonians with war if they're not permitted to set up military bases in Estonia. The government, wanting to avoid casualties, was forced to agree. A transfer of troops into the country and a rigged election later, the Soviet-approved puppet government "requested" that Estonia be admitted into the USSR.

When the Nazis reached Estonia some people hoped that the country would be freed with their arrival, but instead it was made part of the "Ostland" province for the next couple of years. The remaining Baltic Germans were evacuated to Germany and the Holocaust was carried out, with most of the Estonian Jewish population, who had enjoyed cultural autonomy in the independence period, either fleeing the country or killed. The cities of Tallinn and Narva were also seriously damaged by bombing during the war. After the Germans started retreating, Estonians made yet another attempt at restoring independence, but the country was annexed by the Soviet Union again.

During the Stalinist era, masses of Estonians were deported to Siberia and a guerrilla movement called the "Forest Brothers" attempted to fight back against the Soviets. Things somewhat normalized after Khrushchev came to power; Estonia's first TV channel, ETV, started broadcasting in 1955 and both Tallinn and other regions saw quite a bit of development. On the other hand, the Moscow-endorsed immigration of a number of mostly Russian-speaking people from other Soviet states to Estonia (both as workforce and due to the "Sovietization" policy) also took place. During the 1980 Olympic Games, the sailing events were held in Tallinn - the Estonians deliberately bid for this, partly as a chance to call more international attention to the occupation.

Mikhail Gorbachev's attempts to reform the Soviet Union and the resulting freedoms (with similar developments in other satellite and occupied states) fueled a wave of pro-independence protests, ranging from spontaneous singing festivals to a human chain of 2 million people - the Baltic Way - through all three Baltic states. In 1990 free parliamentary elections were held and in 1991 a referendum showed strong support for restoring independence, which was made official on August 20 simultaneously with the hardliner coup against Gorbachev. Since the annexation was always considered illegal, it was seen as re-establishing the pre-war Estonian state.

Being free again, the 1990s were a period of rapid modernizing and making up for lost time while reclaiming Estonia's place in Europe. It opened talks with The European Union and NATO and joined both in 2004, as well as the Eurozone in 2011. After a long period of economic growth, Estonia more or less got through the Great Recession and has carved itself a niche as a "wired" and tech-savvy country.

Estonia and Estonians in media

Various interpretations had been attributed to the flag's colors, of which one of the most popular is that by poet Martin Lipp