Not to be confused with the Dominican Republic further northwest (Though the inhabitants of both countries are called Dominicans in English), the Commonwealth of Dominica (French: Dominique; Island Carib: Wai‘tu kubuli) is a country in the Caribbean and the northernmost island of the Windward Islands chain.
Advertisement:

Originally inhabited by the Kalinago people, the island was colonized by the French, who brought enslaved Africans to populate the island, from the 1690s until the end of the Seven Years' War in 1763, when Great Britain took over and established English as Dominica's official language. The country later became independent in 1978. Unlike most other ex-British West Indies countries, Dominica decided to cut ties with the monarchy of the United Kingdom, so it has its own head of state and is not a Commonwealth Realm, although it remains a part of The Commonwealth of Nations. Before Dominica, Trinidad and Tobago was the only former BWI country to choose this option (though it was a monarchy for 14 years after its independence in 1962, unlike Dominica which became a republic right away), and Barbados has since followed suit.

Dominica's lush rainforests, mountains, freshwater lakes, hot springs and waterfalls have earned the country the nickname of "Nature isle of the Caribbean", with many rare plants, animals and bird species being found there, including the Sisserou parrot, which is an endangered species only found on Dominica and is the country's national bird. It is also the youngest island in the Lesser Antilles, and has the world's second largest hot spring, Boiling Lake, with parts of the island actually still being formed by geothermal-volcanic activity. However, with the island being located in the hurricane region of the Caribbean, hurricanes remain a constant threat to the country. 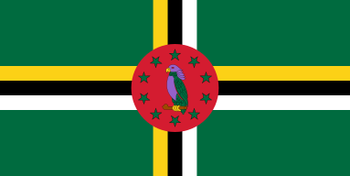 The flag consists of a green field, representing the lush vegetation of the island, a black, white and yellow cross, representing the Trinity and Christianity with the three colors symbolizing the native Indians, the fertile soil and the pure water respectively, and a red disc in the center of the cross with 10 green five-pointed stars surrounding a Sisserou parrot, the national bird of the island, the red disc representing social justice and the 10 green five-pointed stars standing for the country's 10 parishes: St Andrew, St David, St George, St John, St Joseph, St Luke, St Mark, St Patrick, St Paul, and St Peter. It is the only national flag to use the color purple.
Advertisement:
The Dominican national anthem
Isle of beauty, isle of splendour,
Isle to all so sweet and fair,
All must surely gaze in wonder
At thy gifts so rich and rare.
Rivers, valleys, hills and mountains,
All these gifts we do extol.
Healthy land, so like all fountains,
Giving cheer that warms the soul.
Dominica, God hath blest thee
With a clime benign and bright,
Pastures green and flowers of beauty
Filling all with pure delight,
And a people strong and healthy,
Full of godly reverent fear.
May we ever seek to praise Thee
For these gifts so rich and rare.
Come ye forward, sons and daughters
Of this gem beyond compare.
Strive for honour, sons and daughters,
Do the right, be firm, be fair.
Toil with hearts and hands and voices.
We must prosper! Sound the call,
In which ev'ryone rejoices,
"All for Each and Each for All."
GovernmentMiscellaneous