Film / Revenge of the Musketeers 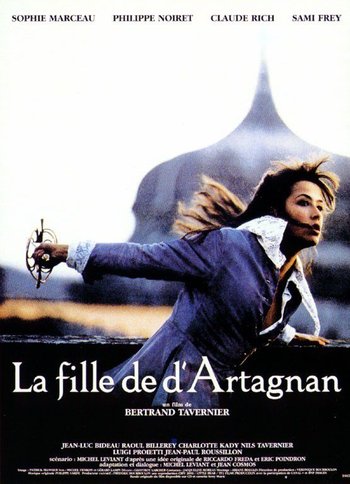 La Fille de D'Artagnan (literally The Daughter of D'Artagnan — the title Revenge of the Musketeers is used in some English speaking countries, others used Dartagnan's Daughter) is a 1994 French swashbuckler film directed by Bertrand Tavernier. It is an original story that borrows elements to both the novel The Three Musketeers and its sequel, Twenty Years After, by Alexandre Dumas.

In the year 1654 in France, an African slave escapes in the woods and ends up in a convent. The slavers, the Duke of Crassac (played by Claude Rich) and his mysterious henchwoman the "Lady in Red", chase the slave there and one of their goons ends up killing the mother superior. The young Éloïse D'Artagnan (Sophie Marceau), daughter of the legendary musketeer (Philippe Noiret), witnesses the murder, and thinks Crassac conspires to assassinate the young king Louis XIV.

Followed by a bumbling young poet named Quentin La Misère (played by Nils Tavernier), Héloïse travels to Paris to find her father so he can help her unfolding the conspiracy against the king before it's too late.

Revenge of the Musketeers provides examples of: