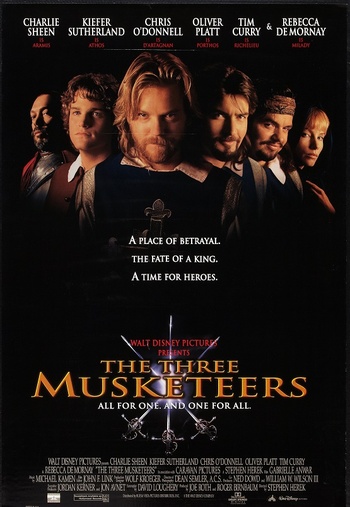 "Let's make it all for one and all for love..."
Advertisement:

The Three Musketeers is a 1993 film produced by Walt Disney Pictures and very loosely based on the novel The Three Musketeers by Alexandre Dumas. It stars Chris O'Donnell as D'Artagnan, Kiefer Sutherland, Charlie Sheen and Oliver Platt as the three Musketeers, Michael Wincott as Rochefort, Tim Curry as the villainous Cardinal Richelieu, and Rebecca De Mornay as Milady de Winter.

D'Artagnan is on his quest to becoming a Musketeer. During his quest he joins the three titular Musketeers in their own quest to stop a plot against the young King. This adaptation greatly simplifies and alters the story.

The relationship between Athos and Anti-Villain Milady de Winter is altered to make the two characters more sympathetic.