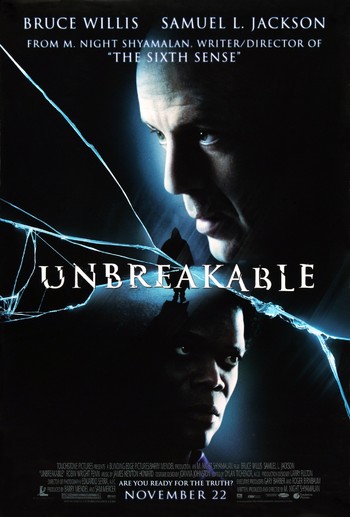 "Real life doesn't fit into little boxes that were drawn for it."
“Do you know what the scariest thing is? To not know your place in this world. To not know why you’re here. That’s... that’s just an awful feeling.”
— Elijah Price
Advertisement:

Unbreakable begins with the birth of Elijah, whose mother discovers that he was born with broken arms and legs due to osteogenesis imperfecta, which makes his bones as fragile as glass. The film then jumps to the present day where David, on his way home to Philadelphia from New York City, ends up in a horrific train crash that kills everyone but him — and David himself is perfectly healthy and unharmed.

Elijah — now a respected owner of a comic book art gallery — contacts David with a letter asking a simple question: “How many days in your life have you been sick?” David is caught off guard and starts thinking back on his entire life, even consulting his wife Audrey, and he cannot remember taking one sick day, having a single headache, or getting bruised. David makes contact with Elijah in return, who offers a very dramatic possible answer. If he, Elijah, is on one end of the spectrum by being so frail and brittle, then the existence of someone who is on the other end of the spectrum, having superhuman durability, must balance the equation — and he believes David to be this person. He bases this conclusion on his love of comic books, and believing that ‘super’ humans exist but are dismissed because of the commercialization of superheroes.

David doubts he’s a Real Life superhero, but the possibility leads to some deep self-examination. In addition to being (allegedly) Made of Iron, David also seems to have a subconscious ability to ‘read’ people and know the evil things they have done… or are about to do. He begins to wonder whether it’s possible that he’s never been hurt in his life or if it’s all coincidence and selective memory, and whether his alleged extrasensory powers are all just in his imagination. David starts considering how the theory, if true, could affect his purpose in life and his family’s failing happiness, especially after being the lone survivor of a train crash, both of which have already caused him deep depression. After all of that, David has to ask himself the most important question: is it worth the risk he’ll take to discover the truth?

A sequel, Glass, was released in 2019, with Bruce Willis and Samuel L. Jackson returning as their respective characters.

Unbreakable has one hell of an ending, and it’s pretty much the only ending to a Shyamalan film that hasn’t become an ‘It Was His Sled’ ending. If you haven't seen the movie yet, avert your eyes from the spoilers below and see it for yourself.

"I should’ve known way back when... You know why, David? Because of the kids! They called me Mr. Glass."