Film / The Man in the Iron Mask 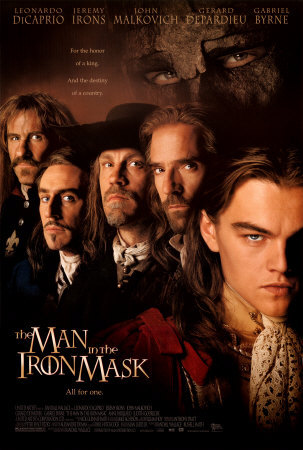 "Some of this is legend, but at least this much is fact; when rioting citizens of France destroyed the Bastille, they discovered within its records this mysterious entry: Prisoner # 64389000 - The Man in the Iron Mask."
—Aramis, Opening Narration
Advertisement:

The Man in the Iron Mask is a 1998 film adaptation of The Vicomte de Bragelonne (1847-1850) by Alexandre Dumas. The original serial novel was a sequel to The Three Musketeers. One of many adaptations, the film was the first directed by Randall Wallace, previously known for writing Braveheart. The main stars were Leonardo DiCaprio, Jeremy Irons, John Malkovich, Gabriel Byrne, Gérard Depardieu, and Anne Parillaud.

The year is 1662. Gone are Cardinal Richelieu (died 1642) and Louis XIII of France (died 1643). France is ruled by Louis XIV (DiCaprio), son of his predecessor. He is a militarist who is already bankrupting the country with unpopular wars, which are condemned by dissidents called Jesuits. Privately, Louis follows a hedonistic lifestyle and keeps many mistresses. Meanwhile, the peasants of Paris are starving and a food riot begins. Louis XIV commands one of his advisors to send rotten food to the rioters. The riot stops temporarily, the people get sick, and the advisor is executed for "his" crime.

So, what has happened to the Musketeers? Aramis (Irons), Athos (Malkovich), and Porthos (Depardieu) have retired from service. Aramis is now a priest. Porthos spends much of his free time frequenting brothels he owns, though his impotence causes him great suffering. Athos married and had a son that he raised as a single father following the death of his wife. His beloved son Raoul (Peter Sarsgaard) currently serves in the French Army. Only D'Artagnan (Byrne) is still in the service of the King. Enraged by receiving rotten food, starving people march to the gates of Louis's palace, and the guards prepare to fire. D'Artagnan prevents a massacre from occurring, winning over the crowd with his popularity and promise to speak with Louis over the matter. He also thwarts an assassination attempt on Louis by a man who exhorts "feed your people." However, things change abruptly. Raoul is about to marry Christine (Judith Godreche), a woman who Louis wants to add to his stable of mistresses, so Louis gets Raoul killed in a Uriah Gambit, leaving Louis free to seduce Christine. Louis also orders the assassination of whoever is the secret leader of the Jesuits, which happens to be Aramis. Now both Aramis and Athos have reasons to hate Louis. They recruit Porthos in a plot against Louis.

Aramis is aware that Louis has a twin brother. Said brother Philippe (DiCaprio again) is the titular Man in the Iron Mask, kept prisoner to prevent him from claiming the throne. He is gentler and more compassionate than Louis. Their plot involves releasing Philippe and having him impersonate Louis, effectively replacing the King with a new one. They will have to face D'Artagnan, who is still loyal to Louis. They will also have to learn a secret Anne of Austria (Parillaud), widow of Louis XIII and mother of the boys, has kept to herself.