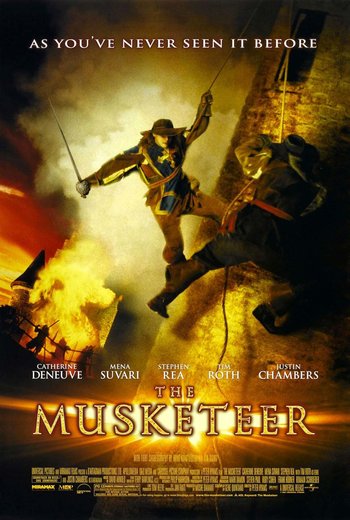 Truth in advertising.
Rochefort: You have an interesting fighting style. Where did you acquire it?
D'Artagnan: Here and there.
Rochefort: Perhaps there. Certainly not here.
Advertisement:

The Musketeer is a 2001 film directed by Peter Hyams, very loosely based on the classic adventure novel The Three Musketeers by Alexandre Dumas. It stars Tim Roth, Catherine Deneuve, Mena Suvari, Stephen Rea and Justin Chambers as D'Artagnan.

As the title indicates, this adaptation beefs up the role of the main protagonist D'Artagnan, resulting in less focus on him and the titular trio being True Companions. The original plot is pretty much abandoned.

It also stands out among the many Three Musketeers movies by taking influence from the Chinese wuxia film genre, giving D'Artagnan "exotic" Eastern-style Implausible Fencing Powers and making him do insane Jackie Chan-style stunts - like a sword fight in a room full of ladders, or while hanging on ropes while scaling a tower. The fight choreography was handled by Xin-Xin Xiong, associate of director Tsui Hark.