Film / Music of the Heart 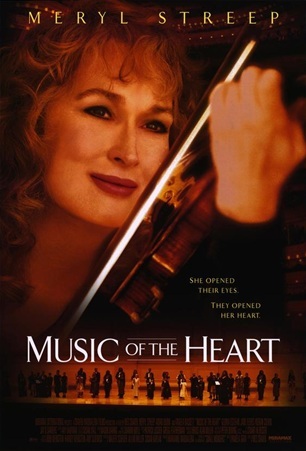 Music of the Heart is a 1999 dramatic/biopic film, directed by Wes Craven (yes, you read correctly, that Wes Craven) and starring Meryl Streep. The film is based on the documentary Small Wonders, which chronicled violinist and educator Roberta Guaspari (Streep) organizing a violin program conducted for inner-city kids in Harlem and eventually holding the "Fiddlefest" concerts to save her program. The film takes place over the course of ten years (1981-1991).

The film opens in 1981 with Roberta as a renowned music educator and performer who just recently divorced George Tzeveras. Needing a job to support herself and her two sons, she accepts a position as a violin teacher in East Harlem.

The film then follows her life as a teacher who has to go through different trials. She organizes a violin program for younger children as she feels any young child could learn to play the violin, and that it will be a good form of expression for the children who are growing up in a tough, tough neighborhood. She inspires troubled students to make something of themselves, change their lives for the better.

By 1991, Roberta has spent her last decade devoted to her students as well as her family. Her program for violinists is still ongoing. Then, her life turns for the worst. The New York City Board of Education decides to make necessary budget cuts. One of the first to go is the music program, leaving Roberta unemployed. In an effort to save her program, she helps her students and alumni, as well as their parents, organize the "Fiddlefest" concerts and invites well-known violinists to play with her. The concert is successful and her music program is saved.