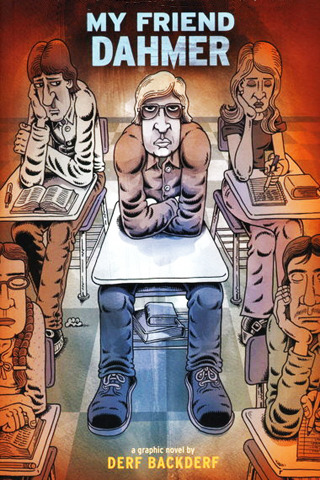 Portrait of the Monster as a Young Man.
"When I was a kid, I was just like anybody else."
— Jeff Dahmer
Advertisement:

During his teenage years in suburban Ohio, aspiring cartoonist John "Derf" Backderf attended Revere High School. He led a normal existence, with a close circle of friends, a loving family, and aspirations of leaving small-town life after entering an art college. He went through the same triumphs and travails of adolescence as most of his peers. There were no details in his life which stood out in any significant way. At the time.

Then, his classmate grew up to be Jeffrey Dahmer.

Derf's comic, later expanded into a much longer graphic novel released in 2012, chronicles the years he spent together with Dahmer in high school, unknowingly witnessing his friend's transformation into one of the most infamous Serial Killers in modern history. Along the way, Derf asks pertinent questions about why nobody – especially the adults – ever figured out Dahmer was tormented by what in hindsight were painfully obvious personal demons.

A film adaptation was released in 2017 starring Alex Wolff as teenage Backderf and Ross Lynch as teenage Jeffrey Dahmer.

Tropes in the Comics: