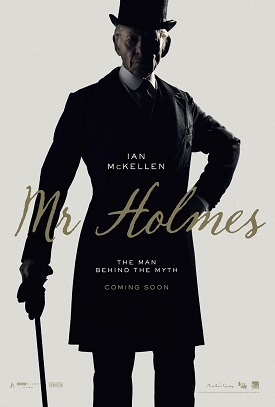 Mr. Holmes is a 2015 drama/mystery film directed by Bill Condon and starring Ian McKellen as Sherlock Holmes. It is based on Mitch Cullin's novel A Slight Trick of the Mind.

In post-WWII England, the 93-year-old Holmes lives in retirement, tending to his bees and generally wishing to be left alone. It becomes increasingly clear, however, that his once-brilliant mind has begun to fail him. Realizing this, Holmes becomes newly determined to solve one last mystery: recalling the details of the case that drove him into retirement 35 years earlier.

Laura Linney and Milo Harris co-star as Holmes's housekeeper Mrs. Munro and her son Roger, respectively. The film has been praised for its old-fashioned take on the character, and for McKellen's brilliant performance in the title role. The film was released in the UK on June 19, 2015 and in the US on July 17, 2015.