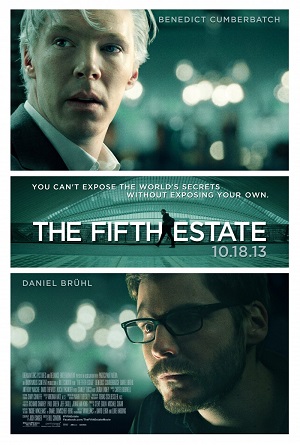 The Fifth Estate is a movie directed by Bill Condon about the founding of the controversial website Wikileaks. It stars Benedict Cumberbatch as Julian Assange and Daniel Brühl as his colleague Daniel Domscheit-Berg (and is based on Domscheit-Berg's book Inside WikiLeaks: My Time with Julian Assange and the World's Most Dangerous Website). It also stars Carice Van Houten, David Thewlis, Stanley Tucci, Laura Linney, Anthony Mackie, Alicia Vikander, Dan Stevens, Peter Capaldi and Alexander Siddig.

The film was released on October 18, 2013 in the States. The trailer can be seen here

For six years, this was Disney's last R-rated release. The break ended with Stuber.

Not to be confused with the long-running CBC newsmagazine series.