Film / A Field in England 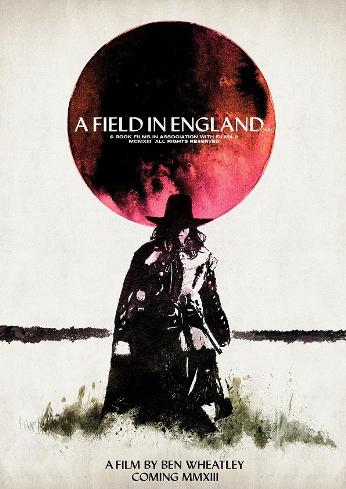 "Open up and let the Devil in."
— O'Neil
Advertisement:

A Field in England is a 2013 psychedelic historical drama set during the English Civil War, directed by Ben Wheatley (also known for Kill List and Sightseers). Filmed on a low budget in Black-and-White, it follows the adventures of a group of deserters and their descent into hallucinogen-induced madness.

The obsequious alchemist's assistant Whitehead (Reece Shearsmith) is searching for an Irishman named O'Neil (Michael Smiley), who has stolen some items of great value from his master. He flees from his strict commander Trower (Julian Barratt) during a skirmish, and meets a man called Cutler along with two deserted soldiers, Jacob and Friend. Cutler entices the others to come along with him with the promise of stopping off at an alehouse. However, he soon reveals himself as O'Neil's accomplice. The two are searching for buried treasure, and take the three other men captive to help them find it, with the aid of psychedelic mushrooms.

The film is notable for being released simultaneously on television, in cinemas, on DVD and as a Video on Demand on Friday, 5th July 2013. As of August 2019, the full film is available for free on Youtube

Whitehead, ranting through his Mushroom Samba: I might write a book! A Field in England: or, the Myriad Particulars of the Corn Weevil.
Jacob: [deadpan] Catchy.