Film / The Ghost of Yotsuya 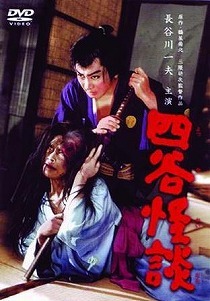 The Ghost of Yotsuya (Tokaido Yotsuya kaidan, "Ghost Story of Yotsuya in Tokaido") is a 1959 horror film from Japan directed by Nobuo Nakagawa.

It is based on the 1825 kabuki play Yotsuya Kaidan, which became hugely famous in Japan and is probably the Trope Maker for Stringy-Haired Ghost Girl. The film is set at the time of the play. Iemon Tamiya, a ronin samurai, approaches Samo Yotsuya for the hand of Samo's daughter, Oiwa. Samo has accurately sized up Iemon as a "libertine" and basically a dirtbag, and so he scornfully refuses. But when Samo calls Iemon a fool, Iemon freaks out and kills him, and his traveling companion.

He does not, hoewever, kill Samo's servant Naosuke. It turns out that Naosuke isn't all that broken up by the death of his master, himself wanting Samo's other daughter, Osode. They hit upon a scheme. Samo's traveling companion was the father of a nice young man named Yomoshichi, himself a samurai, and Osode's fiance. Iemon and Naosuke accuse a bandit named Usaburo of the murders and set off after him along with Yomoshichi. However, once they are safely away from the sisters they murder Yomoshichi and pin that crime on Usaburo as well. Iemon and Naosuke each claim a sister for their own and go their separate ways.

Cut forward a couple of years. Both couples are living in poverty. Iemon has fathered a child with Oiwa but has grown tired of her. Oiwa remains the dutiful wife, but she's well past the Despair Event Horizon. When Iemon more or less accidentally prevents the kidnapping of a lovely young noblewoman named Ume, he becomes a favorite of Ume's noble father, Ito. Iemon and his once-again partner in crime Naosuke see a way out of their dead-end lives—but there remains the inconvenient presence of Iemon's wife.