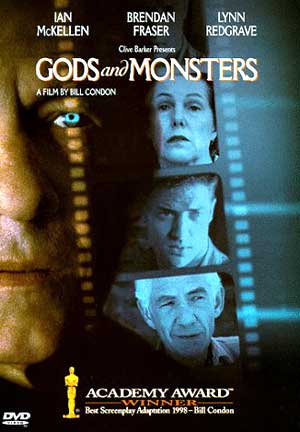 Gods and Monsters is a 1998 film written and directed by Bill Condon which offers a semi-fictionalized account of James Whale (a film director of the 1930s and '40s, best known for such Universal Horror classics as Frankenstein and The Invisible Man) in the final days of his life. It was adapted from Christopher Bram's 1995 novel Father of Frankenstein.

Having recently suffered a stroke, Whale (Ian McKellen) is slowly losing his mind; unable to concentrate and often lost in his dark and hedonistic past. Out of boredom he starts sketching his gardener (Brendan Fraser), while he is also enjoying the *ahem* view. See, James Whale was gay, openly so, and a large portion of the film focuses on what it was like to be a gay man at the turn of the 20th century.

It received a large amount of praise and won an Academy Award for Best Adapted Screenplay (and was nominated for two others). No relation to fantasy literature series Gods and Monsters.