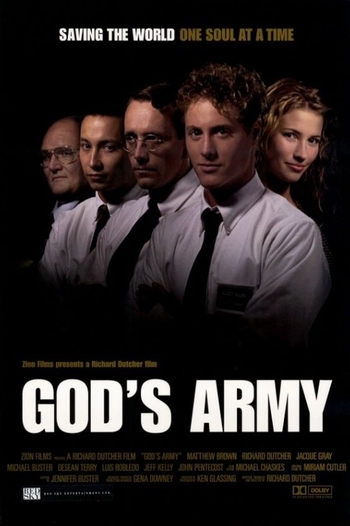 "The field is white, ready to harvest...even in Los Angeles."
—Elder Dalton AKA Pops
Advertisement:

God's Army is a 2000 independent religious drama film written, directed, and starring Richard Dutcher. The film centers on Brandon Allen (Matthew A. Brown), a new LDS missionary serving in Los Angeles. He is assigned with Marcus Dalton (Dutcher), nicknamed "Pops" due to being the oldest missionary in the mission field, who is slowly succumbing to brain cancer. Other missionaries joining them include the black recruit Elder Banks, the spiritually struggling Elder Kinegar, and the emotionally devastated Sister Fronk.

Throughout his mission, Allen finds the rules overwhelming and difficult, even threatening to leave on the first night. But as he experiences the struggles and sacrifices the other missionaries have to face, he'll discover that the most crucial person he needs to convert is himself.

While Mormons had been portrayed in countless movies beforehand, Dutcher found such portraits stereotypical and wanted to give audiences a more raw and honest look at what being a missionary was really about. Shot on a low-budget of $300,000, God's Army was a surprise box office hit, grossing over $2.6 million at the box office and earning the same amount in VHS/DVD sales. The film's success launched the modern Mormon Cinema genre, though films made in its wake were not exactly what Dutcher was expecting.

A sequel to this film, titled States of Grace, was released in 2005.