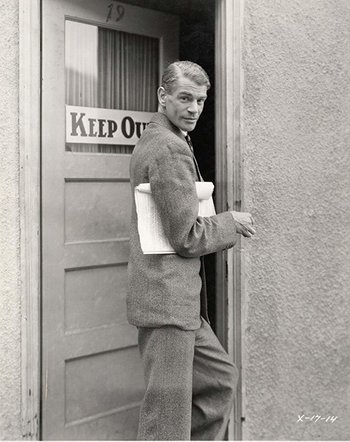 "A director must be pretty bad if he can't get a thrill out of war, murder, robbery."
Advertisement:

He first found success in 1928 as a director in theatre in his native England with the play Journey's End, which later transferred to the United States and eventually into a film two years later with Whale making his feature film debut as a director. (He had previously directed the dialogue sequences for Hell's Angels.) Following the success of Journey's End, Universal Studios signed him to a five-year contract.

But his legacy would be sealed with a loose adaptation of Mary Shelley's magnum opus, which Whale had chosen because none of the other Universal properties interested him and he wanted to make something other than a war picture. He was personally responsible for picking Boris Karloff to play the Monster, and the success of Frankenstein and its sequel four years later immortalized the both of them as seminal figures of the horror genre.

Having had his fill of the horror genre (including turning down the chance to direct Dracula's Daughter), Whale went on to direct Show Boat which critics called the definitive film version of the stage musical. But Whale's career suffered a misstep after making The Road Back, a sequel of sorts to All Quiet on the Western Front. George Gyssling, the Los Angeles-based consul for Nazi Germany, protested that the film gave an "untrue and distorted picture of the German people". In response, Universal re-shot scenes with another director, added comedic scenes to the script, and re-edited the film to water down its anti-Nazi sentiments. (Ironically, the film still got banned in Germany.) Furious at the studio's actions, Whale left Universal after making 1938's Wives Under Suspicion. (Apart from making Green Hell two years later, his ties with Universal were severed.)

Whale retired from the film industry in 1941 (save for an Army training film the following year), devoting his final years to directing theatre and painting. On May 29, 1957, Whale was found dead in his swimming pool, the cause of his death a mystery for years. It wasn't until 1987 when — shortly before his own death — film producer and Whale's former partner David Lewis, who had found the director dead, released the partial contents of a note that confirmed that Whale had died from suicide rather than an accident.

During his career in both British theatre and Hollywood, Whale lived as an openly gay man, something that was completely unheard of in those times. And in the years following his death, film historians and gay studies scholars would pick up on cues of homosexual themes in Whale's films, most notably in Bride of Frankenstein.

He was portrayed by Ian McKellen in the 1998 film Gods and Monsters.