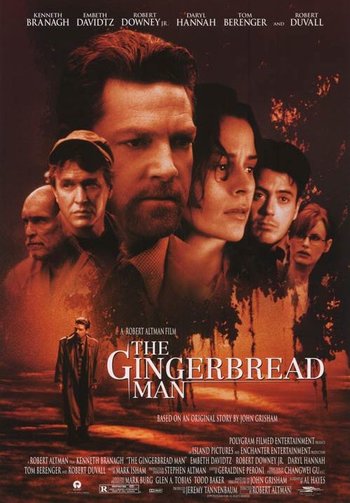 The Gingerbread Man is a 1998 Neo-Noir legal Thriller, directed by Robert Altman, based on a story by John Grisham.

Rick Magruder (Kenneth Branagh) is a lawyer based in Savannah, Georgia. His success in the courtroom is balanced by his messy personal life. He's divorced, and his relationship with his ex-wife Leeanne (Famke Janssen), with whom he has joint custody of their children, is still tense. He's also a bit of an Alcoholic, and very much a womanizer.

After a party in his honor, he gives a ride to Mallory Doss (Embeth Davidtz), a leggy waitress who helped cater the party, when her car is stolen. Once they get home, she reveals that the car was stolen by her father, Dixon Doss (Robert Duvall), an elderly eccentric who's been stalking her. Rick's efforts to calm Mallory down turn into a sexual relationship, and he also takes her on as a client in her legal struggles against her father. As it happens, Rick's Private Detective friend Clyde Pell (Robert Downey Jr.) knows Mallory from a previous stint investigating Dixon. With the reluctant help of Mallory's ex-husband Pete Randle (Tom Berenger), a judge orders Dixon to be committed to a mental hospital, but he soon escapes. When someone starts following Rick and sends him mail threatening both him and his children, he enlists the help of Clyde, Mallory and his assistant Lois (Daryl Hannah). But cruel twists in the story await him.

The Gingerbread Man began as a screenplay that Grisham started writing just before he achieved his breakthrough as a novelist. It ultimately fell into Branagh's hands. After Altman was brought on to direct, the story underwent a major rewrite, which didn't please Grisham. Finished in 1997, it sat on the The Shelf of Movie Languishment for over a year, after a failed bout of Executive Meddling, before it was given a limited release and became a Box Office Bomb.