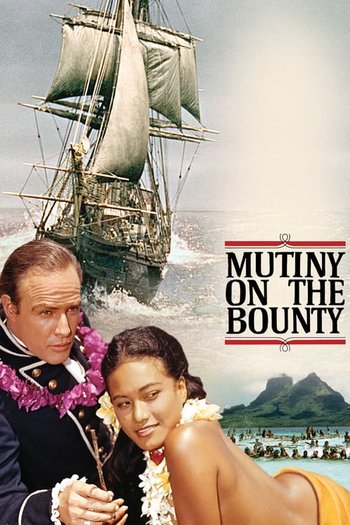 Mutiny on the Bounty is a 1962 historical drama film directed by Lewis Milestone, starring Marlon Brando, Trevor Howard, and Richard Harris. It is one of many works about the mutiny on HMAV Bounty in 1789, loosely adapted by screenwriter Charles Lederer from the novel of the same name.

Under the command of Captain William Bligh (Howard), the Royal Navy vessel HMAV Bounty departs from Portsmouth on a voyage to Tahiti in December 1787. The purpose of the trip is to harvest the breadfruit plant, abundant on Tahiti, and take it to the British West Indies where it can be used as cheap food for Britain's slaves. Captain Bligh is a monstrous martinet who pilfers from the ship's stores and pins the blame on a sailor, John Mills (Harris), whom he flogs. Actions such as these earn Bligh the withering contempt of his patrician first mate, Fletcher Christian (Brando), who is loved by the men as much as Bligh is hated.

After a grueling voyage the Bounty makes it to Tahiti. The beach and fruit trees and gorgeous island girls are a welcome change after the brutal outbound voyage. Christian falls in love with Maimiti, the beautiful daughter of the king of Tahiti. But the ship eventually has to leave, and Bligh grows even more vicious and cruel, taking delight when a sailor dies from keelhauling. Finally, Christian leads a mutiny.

The last film directed by Milestone, whose career dated back to the silent era. See also Mutiny on the Bounty, a 1935 version of the story with Charles Laughton as Bligh and Clark Gable as Christian, and The Bounty, a more historically-accurate 1984 version with Anthony Hopkins as Bligh and Mel Gibson as Christian.