Film / My Boyfriend's Back 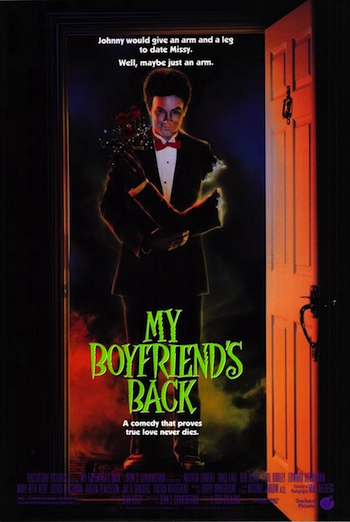 "This was it. This was the beginning of a dream come true. I picked her up early. I had all the right moves. I was like Tom Cruise... only dead."
— Johnny Dingle.
Advertisement:

My Boyfriend's Back is a 1993 romantic Black Comedy film about a young man named Johnny Dingle, who has always pined for his childhood friend Missy McCloud and would want nothing more than to express his feelings and take her to prom. In a misguided attempt to impress her by saving her from a pretend robbery he staged with his friend, he ends up shot dead by a real shoplifter who happened to be stopping by. Not long afterwards, Johnny comes back - as a zombie! And of course, Hilarity Ensues.

Not to be confused with the song of the same title.

My Boyfriend's Back has the following tropes: