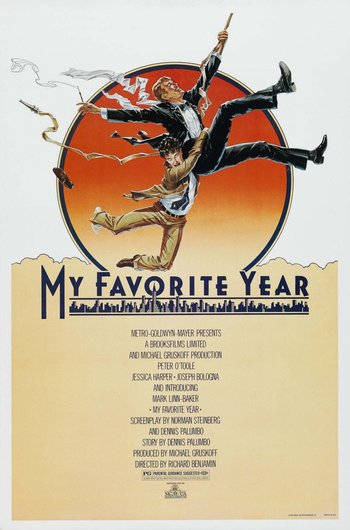 A 1982 comedy film directed by Richard Benjamin and set in New York City in 1954, My Favorite Year is the story of Benjy Stone (Mark Linn-Baker), a comedy writer on King Kaiser's (Joseph Bologna) TV Variety Show, who is tasked with keeping his childhood hero, swashbuckling English actor Alan Swann (Peter O'Toole), sober enough to perform that week. In addition to this daunting task, a union boss objects to the show's parody of him, and has plans to stop the show. Hilarity Ensues.

The film is is a highly fictionalized account of when Errol Flynn guest starred on Sid Caesar's Your Show of Shows, and the characters are almost all based on Real Life people.

Adapted into a 1992 Broadway Musical by Lynn Ahrens and Stephen Flaherty (Ragtime), with Tim Curry starring as Swann.

My Favorite Year contains examples of the following tropes: