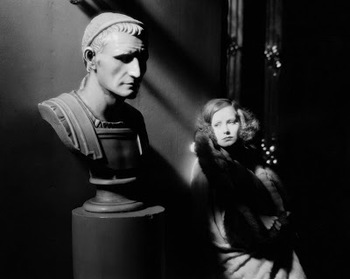 The Mysterious Lady is a 1928 film directed by Fred Niblo, starring Greta Garbo.

Vienna, some time before the outbreak of World War I. Army Captain Karl von Raden (Conrad Nagel) goes to the opera one night with his friend Max Heinrich. The show is sold out, but Karl manages to snag one ticket when it's returned. Said ticket gets him a seat in a box...next to a luscious beauty, Tania Fedorova (Garbo).

After the show Tania admits that she forgot to bring money for a cab. Karl seizes on this chance to escort her home. A nightcap follows, which is followed by sex. The whirlwind romance is soon ended when Tania, without explaining why, says that she must go back home to Russian Poland. Soon after her departure Karl is charged with delivering secret plans to Berlin. Tania meets him on the train and begs forgiveness. He angrily rejects her, she leaves brokenhearted—and Karl discovers that the plans have been stolen.

Compare Mata Hari, a talking Garbo film that had a rather similar plot.