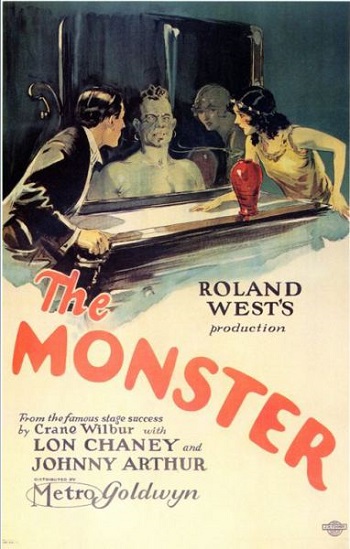 The Monster is a 1925 comedy/horror film directed by Roland West, starring Lon Chaney.

Johnny Goodlittle (Johnny Arthur) is a shop clerk in a small town who aspires to be a detective, and is even taking a correspondence course to learn how. Being an aspiring detective, he is intrigued by the mysterious disappearance of a wealthy local man, John Bowman, who vanished after crashing his car. The local constable doesn't think much of the clue found at the crash scene, a card from the local insane asylum with the word "help" written on it, reminding Johnny that the asylum has been closed for years. And nobody respects Johnny, the town Butt-Monkey, so his objections are overlooked.

In fact Bowman is at the asylum. His wreck was caused by a mysterious man in a cloak, who went out at night and hung a mirror over a curve in the road, causing Bowman to veer off the road and crash. Not long after, on another dark and stormy night, the man in the cloak does this again. This time the people in the wrecked car are Betty (Gertrude Olmstead), the local girl that Johnny has a crush on, and Betty's boyfriend Amos (Hallam Cooley). Betty and Amos stagger away from the wrecked car and find themselves at the asylum, which is now being occupied by sinister Dr. Ziska (Chaney). At the same time a wanderer from the asylum has revealed to Johnny that Bowman is being held there. Johnny winds up stumbling into a trap door and falling into the asylum basement. Johnny, Betty, and Amos then have to fight for their lives against the deranged Dr. Ziska, who has ominous plans for them.

The Monster is one of the most memorable of the many horror films Chaney made in The Roaring '20s. Based on a play by Crane Wilbur, it is one of the first examples of the Old, Dark House genre of horror (pre-dating The Old Dark House by seven years). It is also a very early example of the Sliding Scale of Comedy and Horror, balancing Johnny's bumbling misadventures with the genuinely chilling Dr. Ziska.

Not to be confused with the 2016 film The Monster.