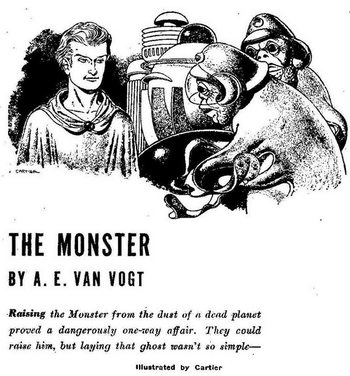 The Monster (also known as Resurrection

The Alien Invasion of Earth has been put on hold: when the Ganae invaders arrive, they find humanity dead in its home. After studying human relics, they discover that although humans were obviously more advanced than themselves, they were all wiped out almost overnight by something. Intrigued, they pick up a number of human remains from different eras and resurrect them for interrogation. The first one is an Egyptian pharaoh; the second is a drunken driver from the 20th century. The third is a man from around 4000 CE, whom they dub "The Monster" after he very nearly wipes all of them out with telepathic control over his era's machinery before they manage to nuke him. However, they still need to discover the reasons for humanity's extinction, so they decide to resurrect someone who actually witnessed it...