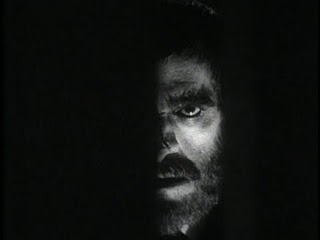 The Old Dark House is a Universal Horror movie from the year 1932. It is based on the 1927 novel Benighted by J. B. Priestley. It was directed by James Whale and features Boris Karloff among its cast. Both men previously contributed to the 1931 Frankenstein.

In the countryside of Wales, several people are caught up in a raging storm and seek shelter from a mansion they come by. There they meet the dysfunctional Femm family and their brutish servant, Morgan. As the night continues, the troubled past of the Femm family starts to threaten our heroes, mainly in the form of the locked-up and dangerously crazy Saul.

Charles Laughton appears in one of his first big film roles as Sir William Porterhouse. Melvyn Douglas is Roger, the Deadpan Snarker in this ensemble. Gloria Stuart stars as Margaret, 65 years before she appeared in Titanic.

It was a dark and stormy night, and the following tropes made themselves apparent: