Film / Monster in the Closet 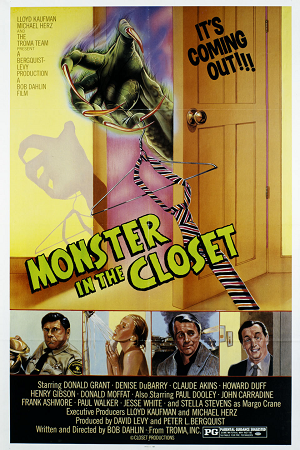 A 1986 monster movie spoof by Troma in which the eponymous creature emerges from its lair (guess where that is) and begins slaughtering citizens in a small Californian town. It's up to would-be newspaper reporter Richard Clark and scientist Diane Bennett to find a way of killing it. Very very campy, but doesn't take itself at all seriously, and is amusing if viewed in the right frame of mind.

Not to be confused with Spalding Gray's Monster In a Box

, which is a completely different film.