Holding Both Sides of the Conversation 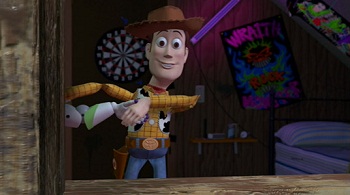 Nothing suspicious here!
Woody: Oh, hi Buzz! Why don't you say hello to the guys over there?
"Buzz": Hi ya, fellas. To infinity and beyond!
— Toy Story
Advertisement:

Let's say we have Bob, Carol, and Alice. This trope is for when Bob is pretending to have a conversation with Alice, even though Alice isn't actually there (or in certain cases may not even exist). The purpose of this is to convince Carol that Alice is actually there, to maintain some lie Bob is pulling. Bob may do this by holding a one-sided conversation with "Alice", or he may even attempt to imitate Alice's voice and hold both sides of the conversation. Depending on the situation, this may involve Bob actually partially/fully disguising himself as Alice to further the ploy.

May also involve that character changing clothes or seating positions to further the absurdity of the one-sided conversation.

Can involve a Paper-Thin Disguise, Of Corpse He's Alive, and Bad "Bad Acting". When done while on the phone, this is a Phoney Call. Can overlap with …But He Sounds Handsome (where Bob is actually pretending to be Alice, and then talks about himself). Not related to Talking to Himself, surprisingly, which refers to Real Life voice actors playing multiple characters.

Cricket tries to get Tilly to settle things with Jilly; she does her best to pull off this ruse with both in the room.

Cricket tries to get Tilly to settle things with Jilly; she does her best to pull off this ruse with both in the room.