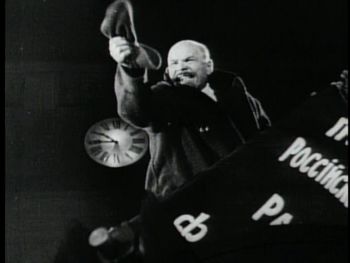 October is a 1928 silent film from the Soviet Union, directed by Sergei Eisenstein. In foreign markets it was given the longer title October: Ten Days That Shook the World, to tie in with the account of the Russian Revolution written by John Reed. It tells the story of the Russian Revolution of 1917, starting with the overthrow of the monarchy, continuing through the unrest of the July Days, and ending with Red October and the seizure of power by the Bolsheviks.

Unlike Eisenstein's previous film, The Battleship Potemkin, October was received relatively poorly both at home and abroad, but it has been Vindicated by History and is now regarded as one of his classics.