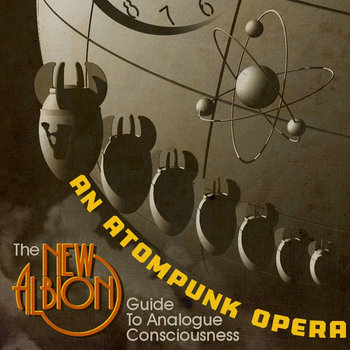 "The New Albion Guide to Analogue Consciousness" is a 4-Act opera composed and written by Paul Shapera in 2014. It is the sequel to The New Albion Radio Hour and The Dolls of New Albion. It is the final part in the New Albion Trilogy, and the audio version of the entire play can be found here

In four acts, each about a half hour long, it tells the story of Rachael, Connor, Lee, and The Mascot 3000 in the desolate city of New Albion, decades after the Dieselpunk Opera, and is narrated by the Mascot herself. After a life of woe and imprisonment, the orphaned Rachael escapes from an insane asylum where she'd been held for two years, both because of her claims that she can hear a radio broadcast proclaiming love for her and as part of a cover-up to protect a politician that seduced her at fifteen. She's given the Mascot 3000 by a mysterious old man (really Connor) and embarks on a journey that tells her how New Albion came to be the way it is now.

The story deals with themes of A.I.s and Brain Uploading, as well as discussing the afterlife "Elysium" alluded to in the first installment of the trilogy.