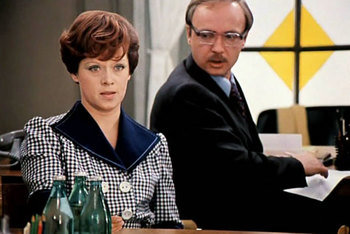 Yep, She Cleans Up Nicely
Advertisement:

Office Romance is a 1977 film from the Soviet Union, directed by Eldar Ryazanov (The Irony of Fate).

Anatoly (Andrey Myagkov, who also starred in The Irony of Fate) is a nebbishy divorced man, now a single father to two boys. He is stuck in a mid-level job at the Statistics Bureau in Moscow, and he is regarded with complete indifference by his boss, the forbidding Ice Queen Ludmilla (Alisa Freindlich). No one likes Ludmilla, and the workers all call her "the Hag" behind her back.

Anatoly gets a major career break when his old friend Yuri comes back from two years working in Switzerland and gets a management position at the Statistics Bureau. He tries to get Ludmilla to give his buddy Anatoly a promotion, but Ludmilla, who is not at all impressed by a slapdash report handed in by Anatoly, shoots that idea down quickly. Yuri recommends a different tactic: he will host a party at his home for everyone in the office, and while there Anatoly will start romancing the spinsterish Ludmilla, hoping to get her to fall for him and thus advance his career. Anatoly's clumsy attempts at wooing Ludmilla end in catastrophic failure, with an angry Anatoly telling Ludmilla that he finds her "dry, inhuman, and heartless."

Anatoly comes to the office the next day expecting to be fired. But his closing insult hit home with Ludmilla, who as it happens is desperately lonely and is rocked to find out that no one in the office likes her. She calls Anatoly into her office to deny that she is inhuman or heartless. A surprising bond begins to form between the two.

A subplot involves Olga, another worker in the office and an old lover of Yuri's, once a beauty but now well into middle age. She's married but she still wants to start things up with Yuri again.

In 2011, a remake titled Office Romance: Present Day was released.

Tropes exclusive to the 2011 remake: