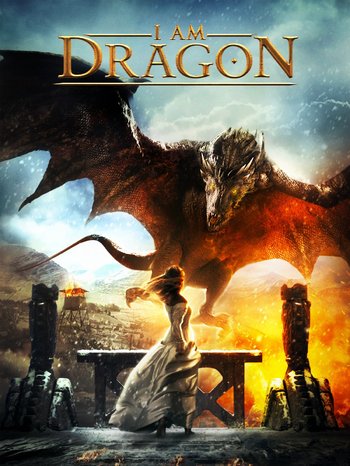 Beauty and the Beast meets Game of Thrones
"I'll teach you to be human."
Advertisement:

Он – дракон (transliterated as On Drakon, translated in English I Am Dragon or He's A Dragon) is a 2015 Russian Romantic Fantasy film starring Maria Poezzhaeva and Matvey Lykov.

For hundreds of years, the people of a certain kingdom sacrificed their daughters in a ritual to appease a ferocious dragon. One day, a knight whose beloved was taken traveled to the island of the dragons and avenged his beloved's death by killing the dragon himself. Now, two generations later, the grandson of the dragon-slayer, Igor, is pledged to be married to the duke's youngest daughter, Miroslava - the ritual to appease the dragon has been transformed into a marriage rite. But when they sing the dragon song, the dragon they thought long dead kidnaps her and takes her to his magical island in the middle of the sea... and is revealed to not only be a deadly monster, but a man who hates and fears the dragon within him.