Film / Orphans of the Storm 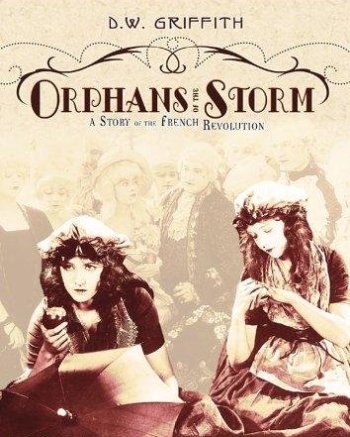 Orphans of the Storm is a 1921 silent film, directed by D. W. Griffith and starring real-life sisters Lillian Gish and Dorothy Gish. It was based on the French novel Les deux orphelines by Adolphe d'Ennery. It is also a remake of a 1915 lost film called The Two Orphans. It was the last Griffith film featurning his regular heroine, Lillian Gish; his career went into decline after his most popular star struck out on her own.

In 18th century France, Henriette and Louise are orphan sisters who struggle to survive in extreme poverty. Louise goes blind from an illness that also killed their parents (presumably smallpox). Henriette (Lillian Gish) takes Louise (Dorothy Gish) to Paris in hopes of finding a doctor who will restore her sight, but almost as soon as they arrive Henriette is abducted by a lustful aristocrat, the Marquis de Praille. She is saved from an impending rape by the Chevalier de Vaudrey (Joseph Schildkraut), seeming the only French nobleman with a conscience. For her part Louise, blind and helpless on the streets of Paris, falls into the clutches of Mother Frochard, a con artist who decides to set Louise to begging for change.

Meanwhile, unrest rises, and climaxes into the violent turmoil of The French Revolution, which is depicted from the perspective of both sisters.