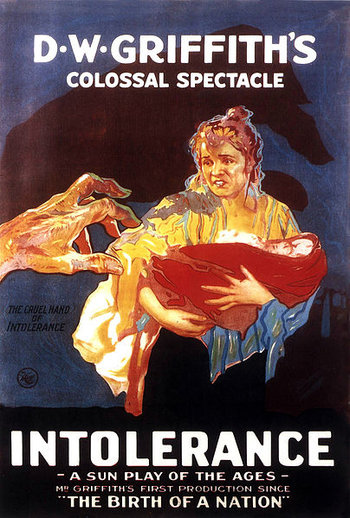 "Our play is made up of four separate stories, laid in different periods of history, each with its own set of characters. Each story shows how hatred and intolerance, through all the ages, have battled against love and charity."
— Opening title card
Advertisement:

Intolerance is a 1916 silent film, directed by D. W. Griffith, with four stories about mankind's intolerance. Each story takes place in a separate time and place in world history. Rather than being told sequentially, the film constantly cuts from one story to another, establishing moral and psychological links between all of them — effectively telling all four stories in parallel.

It was made in direct response to Griffith's previous film, The Birth of a Nation. Some stories hold that Griffith was The Atoner after the backlash to that horrifically racist film. The truth, however, is that Griffith thought the outrage against his Magnum Opus was an example of political correctness, and felt the "intolerance" had been directed at him. Regardless of what sparked its creation, this film itself is not specifically about race relations.

The four stories are:

The original concept was to give equal time to all four stories, but that would have made for an even longer film that the massive product Griffith eventually released. The St. Bartholomew's Day story was cut shorter and the Jesus story was cut even more than that, being reduced to a few scattered scenes; the finished film gives considerably more attention to the modern-day "Mother and the Law" story and the Babylon story than the other two.

Some of the architecture from the film's Hall of Babylon scene has been recreated at the Hollywood & Highland Center in Los Angeles.

The film was a commercial failure in its time, owed to a combination of its high production costs and the fact that the United States entered World War I just months after its premiere, leading many to mistake the film as a denouncing of the global conflict. Today however, it's widely considered a classic of American cinema; the fact that Griffith bungled his pro-racism message so hard that it becomes easy to read the film as anti-racism probably helps.

According to Lillian Gish's memoir, Griffith performed Executive Meddling by reediting the film several times after its release, cutting even more from the French and Judean stories and adding more Babylon material after Griffith realized that the Babylon segment was the most popular. "The Fall of Babylon" and "The Mother and the Law" were eventually reissued as standalone features with additional scenes shot. It's unlikely that the original version of Intolerance will ever be restored since most of the footage edited out of the film after its initial release has been lost.